Earlier saw the release of a new piece of promo art for Marvel’s Ant-Man, giving us a much better look at the Ant-Man suit, as well as our first official look at the villain Yellowjacket and his suit. But of course, Marvel isn’t going to let that be the only thing we talk about today. They have released a bunch, and I mean a bunch, of pieces of promo art for the hugely anticipated Avengers: Age of Ultron. They aren’t just cool superhero stances or looks at the characters, some interesting new details and new powers/weapons are also revealed. You can see the awesome new images after the jump.

Below you can see promo art featuring Thor, Hulk, Hulkbuster, Ultron, Vision, and Black Widow. Here’s the images followed by a little description about what’s going in with them. 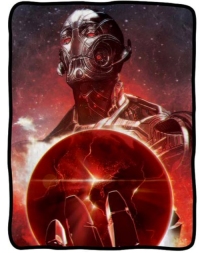 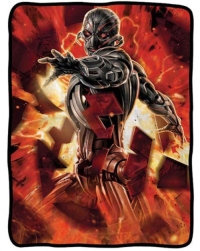 Hulk vs. Hulkbuster: Let’s just face it, there isn’t much I can say besides how freaking awesome it is and how damn excited I am to see this fight go down. It’s been something that’s been wanted for a long time now and now that it’s coming, it’s definitely one of those moments from Age of Ultron that fans are looking forward to the most.

Ultron: The first image of Ultron, you can see him holding some kind of orb. Some sites have run with that idea wondering what the orb is and how it plays into Age of Ultron. But if you look closely, it’s earth. It has the continents on it, which means he has Earth in his hands. I don’t believe it’s an orb of any kind, it would be way to similar to the first Avengers with the tesseract, and somewhat similar to Guardians of the Galaxy as well.

As for his Biography, that reveals a huge SPOILER. So if don’t want to know, stop reading now. The description reveals that Ultron is a ‘simple computer program hidden among the ruins of the Chitauri invasion’. Meaning Tony Stark has been playing with the technology of the Chitauri and created Ultron from that. The description also confirms that Ultron will in fact be trying to update himself as he does in the comics (tying in the Black Panther stuff maybe?) – I can’t wait to see that all play out!

Vision: Over the last few weeks, we have gotten a bunch of really good looks at Paul Bettany’s Vision. We have yet to see any footage of him, which really sucks, but the detailed promos and concept art have been keeping us over pretty well. Again, this biography from the image above reveals a pretty big SPOILER, so you’ve been warned.

Not only does it reveal the powers that Vision will have (staying pretty true to the comics), but it reveals that he will be the love-child of the combined minds of Tony Stark and Bruce Banner, instead of being created by Ultron like in the comics – which I am completely fine with. In addition, it says that ‘Vision has proved himself a worthy hero’, confirming he will in fact be fighting alongside Earth’s Mightiest Heroes.

As for the second image, it shows off one of Vision’s many powers in action. Showing that he will be able to phase through solids objects, making him that much more dangerous.

Black Widow: This is the first full body shot we’ve seen of Black Widow, this time showing off her new weapons, electroshock batons. In the three movies we’ve seen with her, she’s only used her traditional Widow’s Bite a few times, so hopefully seeing the addition of the badass looking batons is a statement that we will see Widow using more than just her handy pistols.

With the more and more promos and images coming out for Age of Ultron, could it be hinting that a new second trailer could be on its way here soon? We won’t know for sure until that happens, but stay close for all things Marvel.