Legendary Pictures recently held a  film panel for the upcoming video game adaptation Warcraft at this year’s Blizzcon (convention for Warcraft®, StarCraft®, and Diablo®). Director of Warcraft, Duncan Jones gave fans in attendance some insight on the upcoming film which is currently in deep post production stages.  Jones revealed the characters in the film, along with official posters for the film.

The characters for Warcraft mainly consist of two sides, The Alliance and The Horde, both of which are in a major conflict . Here are the characters w/ the actor’s names attached to the description. (Collider)

The lead protagonist for the Alliance, Lothar is a war hero who has sacrificed everything to keep the people of Azeroth safe.

King Llane is the leader of the Alliance city of Stormwind and a beacon of hope to its people in a time of darkness.

Known as ‘the Guardian,’ Medivh is a mysterious and reclusive protector who wields formidable power.

Khadgar is a gifted young mage, embarking on a daring search for the truth.

Taria is the royal Queen of Stormwind, King Llane’s great love and most trusted counsel.

Caught between the Alliance and the Horde, Garona is a strong-willed survivor who must decide where her true loyalty lies. 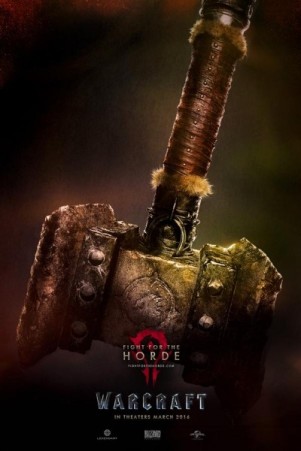 The lead protagonist for the Horde, Durotan is the noble Chieftain of the Frostwolf Clan, battling to save his people and his family from extinction.

Orgrim is Durotan’s right hand and a brave warrior destined to wield the Doomhammer: a weapon of orc legend.

Known as ‘The Destroyer’, Blackhand is one of orc-kind’s most fearsome and titanic warchiefs.

Gul’dan is a supreme orc ruler, fueled by a dark magic that even he cannot control.

A friend of mine, who is my also my insider (@Uce_Zuce) was in attendance for the panel and informed me that Warcraft will focus not just on The Alliance, but on The Horde as well. “The director intends on making the movie more Orc focused, you’re gonna be cheering for the orcs. Ogrim, played by Rob Kazinsky (Pacific Rim) is one of the big roles in the Warcraft film”

When it comes to anything Warcraft, I trust @Uce_Zuce who is a true World of Warcraft gamer and is very impressed with what was shown. I also have faith in Duncan Jones who is well aware that the video game genre for films hasn’t been strong in the past. Warcraft could give the genre the jump it needs, especially with this cast.