Final Trailer for 'The Hobbit: The Battle of the Five Armies' Has Arrived: How Shall This Day End?

There is no doubt that the final The Hobbit movie has been one of the most looked forward to movies of this year. Each fan has been waiting a full year to see how this chapter ends and how it leads into The Lord of the Rings trilogy. It’s almost here people! I may not be the biggest supporter of these movies like others, but I’ve got to say – this final trailer for The Battle of the Five Armies will have me there opening night watching.

Compared to what The Lord of the Rings movies did, the first two The Hobbit movies were just not up to par. But they did get better as they went. The first was an okay step, but the sequel definitely raised the bar and was a much better film. Like I said above, I am not a die hard fan of these movies. Yes I will go to watch because I want to know what happens and see how it leads into the next chapter, but it’s not a religion for me like it is for some.

But from this trailer and this one alone, this looks like it will easily be the best of the trilogy and up to TLOTR standards. It’s, beautiful, electrifying and intense, we can really start to feel what’s at stake and what’s coming. It raises the bar for a The Hobbit movie.

If you have thought, through the first two movies, that this journey is based around Bilbo and his adventure, man are you dead wrong. That’s exactly what I thought going in since I haven’t read the books, but these are Thorin’s movies and his journey. That’s the exact vibe we get from this trailer, this is Thorin’s show and no one else’s. Yeah we get to see characters like Bard and Tauriel, and where Gandalf, Legolas, and Bilbo all end up – but it’s all about the King of the Mountain. From the moments we saw, he is very well turning into the anti-hero in this trailer.Now that doesn’t mean his group won’t fight alongside him as all out war approaches, but it’ll be very, very interesting to see how it all shapes up and ends.

Along with the final and ‘official’ trailer drop today, over the last few days has seen some new images and banners released. Seems like there’s something new for this movie each few days. We don’t want to see the entire movie before it comes out! 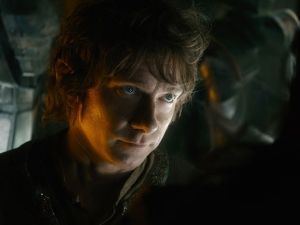 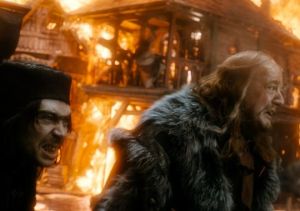