An ex-hitman comes out of retirement to track down the gangsters that took everything from him.

These days when you hear about a movie based around a man seeking revenge, you kind of just turn away from it. Yeah, they are fun and entertaining, but most of the time they are just overall bad or just okay movies. John Wick is different, it’s not just about the assassin wanting revenge. It’s a world that is unique and gritty. Where everyone has a reputation, connections, and knows each other. A world with its history that’s much more than just guns, car chases, and killing – it’s exactly that which makes us so interested. 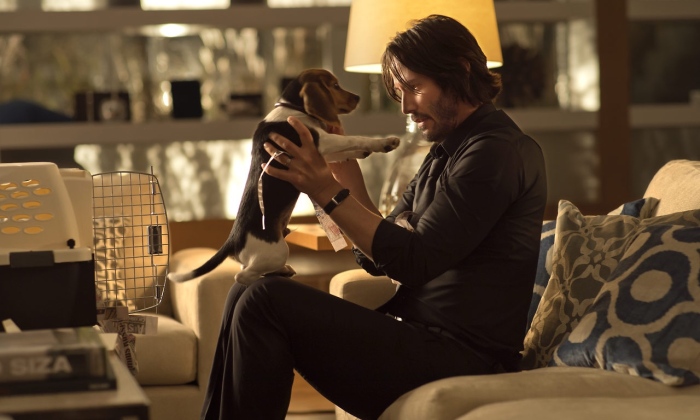 About fifteen minutes in is when I really started to get into it. After the basic break down of learning who Wick is, how his wife died, and right after the break in and stealing of his incredibly badass car – things get interesting! When Iosef (Alfie Allen) brings Wick’s car to the chop shop and the owner Aureilo recognizes it and asks where he got it, you know something is up with John Wick. Is Aureilo his friend? Do they work together? Is he scared of him or does he just realize what’s going to happen? From that moment on, an awesome spiral starts to happen. Eventually leading to the Russian mob boss and Iosef’s father Viggo finding out what has happened and realizing what’s going to happen if he can’t fix it- obviously doesn’t, your kid killed his dog bro! At that moment we know that there is a ton more to this character and story, something that is learned along the way.

That’s when we start to see that this version of New York City is more than just ‘the big apple’, it has some major ‘graphic novel’ feel to it. It’s a crime world run on gold coins and secret oaths by everyone – there’s a hotel that is basically the safe zone, anything done on property goes with major consequences. As Wick travels through this world one more time and continues on his journey for revenge, we have some fun and see interesting things at every turn.

That is easily the best part of the film, the action. It’s real, grounded, and exciting time and time again, with many, if not all, of the fight scenes being long takes and not just short bursts like we usually see. Where we see Reeves and his victims crush through incredibly detailed choreography that adds an unbelievable level of intensity to the film. And the fact that nothing ever feel unrealistic is just awesome. Things (bullets) that should kill people actually kill them, and quickly – really showing how surgeon-esque Wick really is. Something that helped that was the fascinating cinematography, which enhanced each impact. Every scene, whether it be fighting or not, had a very specific feel and look to it. Each major color pops, making this underworld really cool to look at.

We’ve seen the plot hundreds of times, but the way this specific story is dealt with makes it different, makes it stand out. The first time directors, who are accomplished stunt coordinators, brought a real edgy vibe and style to the fighting and story. Giving it that different and stand out-ish feel I’m talking about. The first thing that came to mind when every saw a trailer is, ‘Keanu?’ Many think this guy isn’t any good or just out of the game, but if you are one of those, this movie should and will completely change your mind. In this movie everyone keeps asking him if he’s back, well I’m thinking Keanu is back! It only helps when those around you are big names as well. It seems like every scene without Keanu’s Wick in it, there’s a big name in it. Michael Nyqvist, Willem Dafoe, Adrianne Palicki, Ian McShane, Bridget Moynahan, and John Leguizamo all show up in one way or another.

If there is anything this film falls short in, it’s those moments we are taken out of the movie – whether it’s characters making stupid decisions that make us shake our heads or keeping someone alive to just talk to them. There may be just a few and we may forget about them because it’s an action movie with some pretty damn good action, but it’s definitely something on the negative side.

For first time directors, these guys pulled off one hell of a feat. It may have it’s few misses, as every movie does, but John Wick is a (re)inventive, exhilarating, and fun action movie that learned great things from those that influenced it. Instead of giving us great entertainment and going over the top to thrill, it stays on path and tells the exact story it should. Not to mention bringing in Keanu to have his own fun and tell his own story of returning to action hero status.