Yesterday saw the first real look at the cast of next year’s Terminator: Genisys on the cover of Entertainment Weekly. That happens a lot, EW is known for revealing first looks. But unfortunately, those magazine covers may have been the worst we have ever seen, almost in a childish way. EW continues to reveal looks as today saw character images released, including Arnold and a familiar robot.

We can see Emilia Clarke (Game of Thrones) as Sarah Connor, Jason Clarke (Dawn of the Planet of the Apes) as John Connor, Jai Courtney (Divergent) as Kyle Reese, Schwarzenegger (Sabotage) as the classic T-800, and Matt Smith in an unspecified role, although it’s speculated he is playing Kyle Connor, John Connor’s son and grandchild to Sarah Connor and Kyle Reese. Oh and the classic Terminator robot we have seen through the years of these movies. 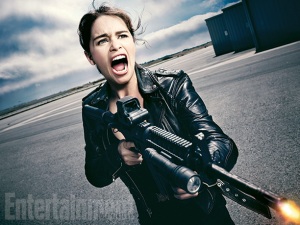 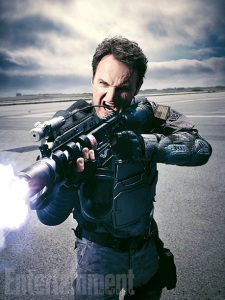 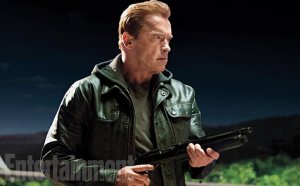 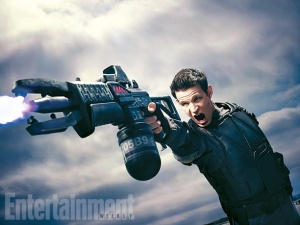 Just like yesterdays magazine covers, what is up with these images? Why is everyone yelling and why are they on an empty landing strip when they are suppose to be fighting Terminator’s? I get that they are ‘promotional’ images, but make them a little better than this – I swear I was running the photo shoot.

I’m still giving this movie the benefit of the doubt, even with the reported plot details (see here). It’s still a Terminator movie, the franchises godfather James Cameron helped with writing the movie, and the cast brought together is pretty damn solid. I said this yesterday, movies in the past have had terrible starts but end up being really good. This is is definitely one I’m hoping turns out that way, it’s Terminator and Arnold is back!