First Look at the Cast of 'Terminator: Genisys' Comes with Plot Details

The latest issues of Entertainment Weekly give us our first official look at the stars of Terminator: Genisys. We’ve seen paparazzi and teaser images so far, but nothing official or with that good of a look. This is one of the most loved sci-fi franchises of all time. When we heard they were making more, safe to say we’ve been anxiously waiting for anything.

Below we can see Emilia Clarke as Sarah Connor, Jai Courtney as Kyle Reese, Jason Clarke as John Connor, and Matt Smith who is reportedly playing Kyle Connor, John’s son and the grandchild to Sarah Connor and Kyle Reese (not official). 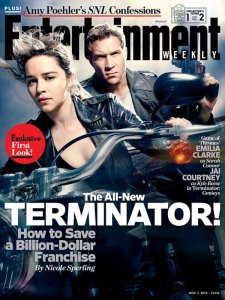 Couple things that need to be talked about. I love Emilia Clarke. She is incredibly talented and one badass chick and really easy on the eyes, duh. But it’s going to be interesting to see her in this role, especially after how Linda Hamilton crushed the role back in the originals. I have no reason to doubt Clarke though, I just hope she can bring that gritty, hard core Sarah Connor to life just as Hamilton did decades go.

I completely dig the castings of Jai Courtney and Jason Clarke. Ever since his days on Spartacus, Courtney has really showed off his skills. Being a bad guy in Jack Reacher and Divergent, and even though the movie was flat-out terrible, he was definitely the bright spot of A Good Day to Die Hard. So needles to say I’m excited to see him in a Terminator flick. As for Jason Clarke, the guy is just awesome. Texas Killing Fields, Lawless, Zero Dark Thirty, White House Down, and Dawn of the Planet of the Apes? The dude just kicks butt on the screen, he should definitely be a highlight.

Lastly, what’s up with the ‘How to Save a Billion-Dolloar Franchise’ thing? I didn’t the franchise was anywhere near a bad situation. Does it mean the movie will be bad? Sure as hell hope not! Plus, we’ve seen plenty of things like this for movies that end up being really, really good. Example from this year? Edge of Tomorrow, my biggest surprise of this year. So don’t worry people; with Alan Taylor is the head chair, James Cameron chiming in, Arnold returning, and a new cast like this one – you should definitely be looking forward to the return of Termiantor.

Along with the covers, a little bit/kind of the plot and details on Emilia Clarke’s character Sarah Connor were released. Careful, this can be considered a little of a spoiler:

The beginning of Terminator: Genisys, the first of three planned films that Paramount hopes will relaunch the beloved sci-fi franchise, is set in 2029, when the Future War is raging and a group of human rebels has the evil artificial-intelligence system Skynet on the ropes. John Connor (Dawn of the Planet of the Apes’ Jason Clarke) is the leader of the resistance, and Kyle Reese (Divergent‘s Jai Courtney) is his loyal soldier, raised in the ruins of post apocalyptic California. As in the original film, Connor sends Reese back to 1984 to save Connor’s mother, Sarah (Game of Thrones‘ Emilia Clarke), from a Terminator programmed to kill her so that she won’t ever give birth to John. But what Reese finds on the other side is nothing like he expected.

Twist No. 1? Sarah Connor isn’t the innocent she was when Linda Hamilton first sported feathered hair and acid-washed jeans in the role. Nor is she Hamilton’s steely zero body-fat warrior in 1991’s T2. Rather, the mother of humanity’s messiah was orphaned by a Terminator at age 9. Since then, she’s been raised by (brace yourself) Schwarzenegger’s Terminator—an older T-800 she calls “Pops”—who is programmed to guard rather than to kill. As a result, Sarah is a highly trained antisocial recluse who’s great with a sniper rifle but not so skilled at the nuances of human emotion.