Since Catching Fire ended with Katniss Everdeen’s dramatic escape from the Hunger Games Arena, we have been awaiting the return of the Mockingjay to see what comes next for the Rebellion. With that ending, a lot of faces got mixed up in the shuffle. These new head shots will at least help us see who the main players for the Rebellion are.

Fortunately, when Katniss took down the Games Arena last year, she was picked up by her people and taken to the infamous District 13. Unfortunately, two of the biggest names in Peeta Mallark and Johanna Mason were both captured by President Snow and the Capitol. As one who hasn’t read the books, it sounds like they will both play a huge part in how these final two movies play out. And since they are both prisoners of the opposing side, we will without a doubt see very little of them until the movie starts playing. 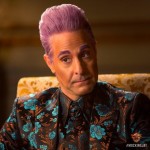 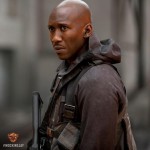 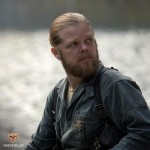 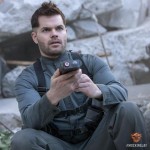 Haymitch, Gale, Effie, Finnick, Plutarch, Beetee, and Caesar are all among those who are returning from previous movies. For some, their roles seem obvious and what they will be doing, but for others it’ll be interesting to see how they fit into the ‘all out war scale’ these final two movies are going for.

For the unfamiliar faces, they are Propo Director Cressida played by Natalie Dormer, President Alma Coin’s right hand man Boggs played by Mahershala Ali, Propo Cameraman Pollux played by Elden Henson, Pollux’s brother Castor played by Wes Chatham, and Production Assistant Messalla played by Evan Ross. As far as I know these characters will be critical in the final two movies as all have gotten their own characters posters and featured in multiple images.