Forget all those leaked set photos taken on the set of Zack Snyder‘s “Batman V Superman: Dawn of Justice” that show absolutely nothing. We have our first official image of “Henry Cavill” as Superman in BvS. By the looks of this photo he doesn’t not seem happy at all. 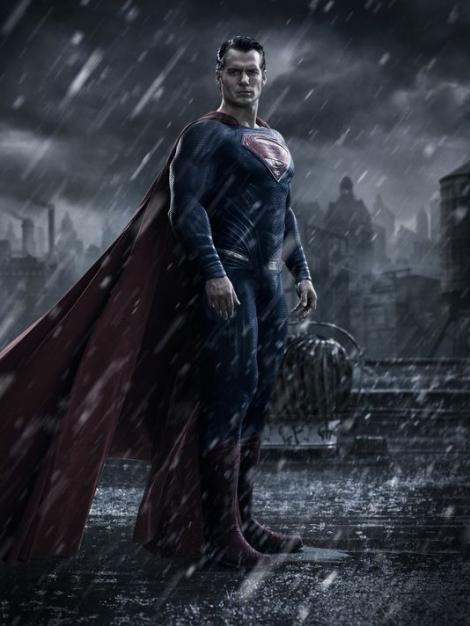 This picture comes courtesy of USA Today. Along with the photo Director “Zack Snyder” spoke on the upcoming sequel featuring Batman and working with Cavill on the Superman character.

“I was in no rush to put Batman in the movie, but on the other hand it seemed organic the way our story was unfolding to start to feather him in. it’s cooler to see a crusty old Batman beating the snot out of guys.”

On working with Cavill on the character of Superman.

“We’ve both created this guy and we can push him around a little bit,” he tells them of working with Cavill. The more time I spend with Henry, the more he’s Superman to me.”

It’s not confirmed at the moment, but look at the background behind Superman and tell me that does not look like a Snyder’s version of Gotham City. The gray clouds and stormy sky, the factory smoke to the far left, even the building structures look completely different from the modern Metropolis. What could Kent be doing in  Gotham City? He looks to be in a serious mood. Is it possible his reputation as a Superhero is being destroyed by Bruce Wayne or Lex Luthor? His actions at the end of “Man of Steel” weren’t exactly hero like. Cavill also looks to be wearing a modified version of the suit from “Man of Steel”.

As the 2016 date gets closer, “Batman V Superman: Dawn of Justice” will start to more feel like the event film that it is. As Snyder says,  “You can talk all you want about other superhero movies, but it’s Batman and Superman, let’s just be honest. I don’t know how you get bigger than that.”

Do you like this first photo from BvS? Where do you think Clark Kent is at in the photo? Express your thoughts below! Thanks for reading.