‘X-Men: Days of Future Past’ Review 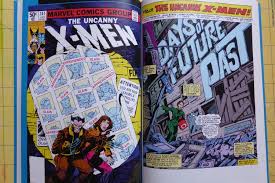 Okay, so my review is a little late to the party but there is good reasoning for that.  After seeing X-MEN: Days of Future Past I wanted let a little time pass and give myself a couple days to let the film resonate in my mind.  As the weekend went by I couldn’t decide  how great this movie actually was to me so I went to see it a second time!  I knew it was amazing after my first screening but seeing it again really solidified the superiority of this film.

As most of you know X-Men DOFP is a story of time travel and takes place in two very different time eras.  Due to a series of events throughout decades of struggling to survive against mutant hunting robots called sentinels, the X-Men must find a way to keep this apocalyptic future from ever happening.  Eventually they figure out a way to send (yup you guessed it!)  Wolverine’s conscious back into his older self during the 70’s when an event triggered the mass production of sentinels which eventually put the X-Men up against their deadliest foes ever.

Usually in a review I would go through my positives first and then later give you guys my negatives of the film.  I am still going to use this strategy but I’m letting you know now that the positives are going to heavily outweigh the negatives.  So let’s begin, shall we.

Positives:  My first initial reaction was indescribable because I was completely astonished by how amazingly well it was put together.  I honestly did not expect this movie to blow my mind the way it did and I probably have not been this excited about a movie since 2012, when Avengers was released.  After-all this is the X-Men’s version of a big super hero team up bringing all of their characters throughout the franchise together for one epic storytelling.  Although I loved this movie oh so very much, I am not ready to say it is better than the Avengers or The Dark Knight, as far as comic book movies go, but I am very positive that it is on the same level as those films.

One of the best things about DOFP is the pace and how each scene transitions to the next so smoothly, allowing the audience to remain entertained throughout the whole movie.  In the beginning, when we see the apocalyptic future, the battle scenes are amazing! Probably one of, if not the best, action sequences in any of the X-Men movies.  One of the main concerns about the movie going into it was all of the characters and how they were going to balance so many of them in a two-hour film.  I must say that although I would’ve loved to see more of the mutants with smaller roles, Singer did an amazing job just focusing on the core story line and attributing that to just a handful of main characters.

As an overall film it has the complete package including a well written script, amazing special effects, and the cast might be the most talented group of actors in a single movie, ever. If you really think about the cast it is ridiculous but the movie never feels like it is too filled with  very recognizable faces.  Each character felt real and you forget they are being portrayed by an actor while becoming lost in the character.

Negatives: There honestly are not  very many negatives about this movie other than some continuity questions.  Although they fixed or “reset” most of the problems set by previous films in the franchise, a couple things have still remained a question.  For example, they never explain how Professor X came back to life after being ripped apart by the Pheonix in The Last Stand.  There are  a few other unexplained plot points but I can’t get into them without spoiling the movie.

There were also a few moments that I thought were a little slow in the more dramatic scenes but even then there was great dialogue and each scene progressed the story further.

Conclusion:  X-Men Days of Future Past is definitely my favorite film of the year so far coming just ahead of Captain America: The Winter Soldier. I also believe that this may be the best X-Men movie of all time, although X2 is nearly just as good. The story telling and direction are absolutely superb and definitely some of the best I have seen in any superhero movie to date.  To me the most exciting thing about this movie is the fact that we get to see the cast of the original trilogy and the First Class movie together in the same film.  It was just as fan pleasing as seeing the Avengers for the first time.  I urge people to go out and see X-Men Days of Future Past, even if you aren’t an X-Men fan it is enjoyable for everyone.

What did you guys think of the movie? Where does it rank among previous comic book/ superhero films? Express your thoughts in the comment section.